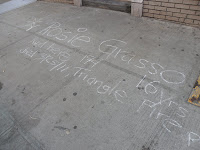 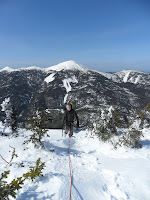 Posted by Rob Snyder at 1:15 PM No comments:

The Halting March of Labor

I always learn from my students at Rutgers-Newark, especially when their experiences and understandings differ from my own. Yesterday, I asked a class of 30--the majority of them journalism majors--how many felt reasonably well-informed about the struggles over unions, public sector workers, and state government in Wisconsin. Only one student raised her hand. This is striking in a school with many immigrant working-class students. Mind you, my students are fully plugged into social media. And at the start of the semester they were fascinated by events in Egypt. But labor struggles don't have any great interest for them.

This more or less accords with my experiences last Saturday, when I attended a demonstration at city hall in New York City. The crowd was not large, and the median age was about 50. Our numbers swelled when we joined forces with a somewhat younger crowd demonstrating for women's reproductive rights at Foley Square. But never did we assemble a large crowd. And both demonstrations--corralled by the police and carefully monitored--conveyed the impression that public assembly in New York City has gone from being a fundamental part of democracy to a nuisance in the eyes of city hall that must be tolerated at best and always controlled.

As the Egyptian revolution unfolded, some of my students interpreted the events in Cairo as proof of the power of social media. That's a partial truth. In Egypt, the uprising can be understood only as the product of social media, varied forms of labor organizing, civic dissent, the Muslim Brotherhood, and satellite television. All of these combined in fascinating ways.

In the USA, we have an abundant and growing world of social media. We also have massive inequalities and a labor movement under fire from many directions. Yet social media alone did not bring out crowds to support the Wisconsin strikers, nor did it reach my students with the Wisconsin workers' plight.

New media forms gain impact in part through their interaction with existing forms of consciousness. Among the young today in the USA, as networked as they are, workers' rights and the value of unions are just not a big part of their political vocabulary. I hope for a change in this, but I can't say that I'm optimistic in the short run.