In my youthful travels in the 1970s and 1980s, I encountered three institutions that deeply impressed me as visions of a good and just way of life: the kibbutz, the British National Health Service, and the BBC. All of these have fallen on difficult times in recent decades, but it is the kibbutz that is the subject of an interesting documentary by Toby Perl Frelich, "Inventing our Lives," now playing at the Quad in Greenwich Village. "Inventing Our Lives" explores the history and current crisis of the kibbutz movement, which has fallen victim to a turn away from socialist ideals in Israel, the movement's own internal fights, the rightward turn in Israeli politics, and the passing of the generation that led kibbutzim from their founding into the 1960s.


The film is a friendly look at the kibbutz, but it doesn't ignore the kibbutz movement's contradictions. Communal child-rearing practices sometimes stifled "normal" family life but left women with the jobs of running childcare for everyone. One kibbutz that she looks at was built, to the distress of its American-born kibbutzniks, on abandoned Palestinian homes. And for all the movement's professed egalitarianism, it could be quite elitist in its own way. In the old Israel, kibbutzniks considered themselves part of the vanguard of Israeli society. One consequence of this was that they never embraced the Middle Eastern Jews who immigrated after 1948, thereby cutting themselves off from what would become a large and growing sector in of Israel's population. This failure, "Inventing Our Lives" notes, was one of many factors that undermined the kibbutzim in the long run.


For all the problems that have befallen the movement, and for all the agonizing that accompanies efforts to either revive or privatize the kibbutzim, Frelich's interviews with founders, their children and their grandchildren convey what was best and most compelling about kibbutz life: the freedom that children enjoyed on the kibbutz grounds, the strong sense of solidarity that could turn a campfire singalong into a a swelling chorus that strengthened the voice of the weakest singer, and the beauty of a life that was lived close to nature and close to the artistic and intellectual heritage that kibbutzniks drew from European humanism.


I encountered all of these at Kibbutz Gvat in the Jezreel Valley in the 1980s, where I was a guest and worked briefly in a small workshop making parts for irrigation systems. I remember how a print of a classical painting hung outside one workroom. The painting, along with the shaded walkways between houses, the cultivated fields around, and the lives my friends there enjoyed as singers and musicians,  seemed to me like the perfect blend of the outdoors life, hard work, culture and learning.


Since the 1980s,  Gvat--like the kibbutzim portrayed in "Inventing Our Lives"--has gone through changes that I'm not in a good position to explain or understand. Whether the kibbutzim disappear or reinvent themselves is an open question left hanging at the end of "Inventing Our Lives." Something similar could be said for the BBC and the National Health Service in Britain. The social democratic ideals that animated all of these, and brought out some of the best in the 20th century, are beleaguered but still relevant. Here's hoping that the kibbutz movement  reinvents itself in a way that creates a more just and democratic Israel.
Posted by Rob Snyder at 11:53 AM 9 comments: 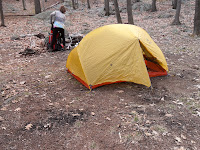 The hiking paths of Harriman State Park crisscross rocky ridges, military routes of the Revolutionary War, and forty years of my own memories as a backpacker. I shared all of these on a recent three-day trip with my daughter Allison.

She's in the background of this photo, making camp at the William Brien Memorial Shelter. We camped here on a route that scribed a great if lopsided circle, from the Bear Mountain Inn to West Mountain Shelter to the Brien shelter and back to the Inn. Over three days I visited some places I haven't seen in decades and checked out some new ones as well.

The view from West Mountain Shelter looking down the Hudson Valley to New York City remains one of my favorites. It's a great destination for a first-time backpacker: the route to the shelter on the Suffern-Bear Mountain Trail climbs enough to make things challenging without making things so hard that a novice will get discouraged.

Even more impressive, though, was the view from the summit of Black Mountain ascended from the east on the Appalachian Trail. I had never walked this stretch before, and it involved a sprint where the Appalachian Trail crosses the Palisades Interstate Parkway. Once you cross the Parkway, the path climbs gradually and then steeply to a beautifully contoured stretch of trail that runs along the summit of Black Mountain. The view towards Bear Mountain to the east, and the great ridges of Harriman State Park to the west, is spectacular. If you stay on the Appalachian Trail from this point, you can then walk to the Brien shelter and camp for the night.

From the Brien shelter, we returned to the Bear Mountain Inn via  Popolopen Gorge, a route that I can't recommend at this time because all sorts of earth moving efforts turn your walk into something like a hike through a construction site. Nevertheless, we eventually came back to Hessian Lake and the Bear Mountain Inn, which marked handsome end to our journey.

It was great to share old memories with Allison, a skilled backpacker in her own right, who at the age of 16 already has stories of outdoor adventures to pass on. Doubtless she will accumulate more.

In our crowded metropolitan region, Harriman remains an invaluable resource that makes the pleasures of the outdoors available to everyone. To learn more about the park, and hiking in our region, check out the NY/NJ Trail Conference. Their good work makes possible the great hiking opportunities of Greater New York.
Posted by Rob Snyder at 11:30 PM 3 comments: