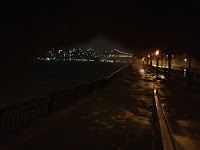 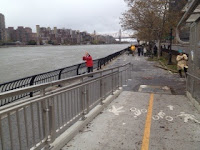 The 1863 Draft Riots, an explosion of protest, race riot and street warfare, are the ugliest upheaval in the history of New York City. Explanations of the episode have changed over time, shifting from economics (Irish workers rioted because they feared competition for jobs from African Americans) to a greater emphasis on white racism. It is the genius of Hard Times, a musical about the riots written by Larry Kirwan, that it grasps both of these explanations in ways that illuminate the hardships suffered by African and Irish Americans in Civil War New York.

The play takes shape in the story of a group of New Yorkers--Protestant and Catholic, Irish and native born, black and white--who seek refuge from the Draft Riots by hiding out in a bar owned by an African American woman, the widow of an Irishman, in the Five Points. The intersections of their lives, rivalries, loves, and animosities illuminate both the characters' individuality and the wrenching conflicts of their time.

Kirwan, whose music with Black 47 has used traditional Irish music, rock and rap to convey the Irish past and present, uses dramatic scenes and the music of Stephen Foster and minstrel shows to tell his story. The choice of Foster, who appears as a character in the play, and the related theme of blackface minstrelsy, are inspired. Foster's story illuminates the blend of vigor and sentimentality that defined American popular music in the mid-nineteenth centry, while minstrelsy helps Kirwan address both the racism and nativism of the time. Kirwan also depicts Foster as tormented by a love affair with a man who turns up in the bar, but this sub theme does more to suggest a reason for Foster's melancholy that it helps to explain his times.

Over the course of Hard Times, Kirwan explores the hardships that scarred both Irish and African Americans----neighbors, rivals and lovers, trapped in a hellish situation. At the same time, he shows how the Irish and African American meeting in song and dance--in the Five Points--produced great American art forms such as tap dance and ragtime. The result is an ending that is sobering yet rousing.

Hard Times was performed at The Cell on 23rd Street in Manhattan as part of the 1stIrish theater festival. Its run is over, but Hard Times surely deserves a revival at another theater soon.