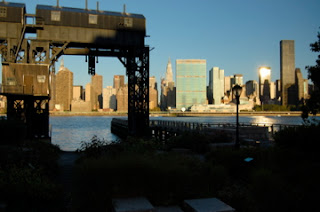 Look out to sea and you behold a timeless vista. Turn around and look at where the sea meets the shore, as the historian John Stilgoe reminds us, and you'll often see a deeply historic scene. This principle holds not just for the ocean, but for the tidal strait that is the New York City's East River--especially in that part of Queens called Long Island City.


Once an industrial neighborhood sandwiched between Astoria to the north and Greenpoint, Brooklyn to the south, in the last ten years Long Island City-particularly the Hunters Point area--has become the site of new, high-rise developments on the east bank of the East River. New buildings, and the parks opened with them, have transformed the shoreline in a kind of microcosm of recent changes all around New York's waterfront. The results are mixed.

On one hand, the new, green shoreline of Long Island City--with public parks and excellent views of Manhattan--has reclaimed the riverbank for public uses. Affluent newcomers to the neighborhood have brought economic development and a range of stores, cafes, bars and restaurants unimaginable seventeen years ago, when I discovered Long Island City as the home of the excellent Italian restaurant, Manducati's.

In 1980, Long Island City was still a working-class, industrial neighborhood. It had a patchwork quality to it, with simple row houses and small apartments adjoining machine shops and factories. The new shoreline high rises, which lie at the western edge of the old neighborhood, aren't really integrated with the old community. To walk from the subway stop at Vernon and Jackson is to start in the world of working class New York and wind up in an enclave of affluence.

I talked to one woman from the neighborhood, who grew up there and now plans to go to Italy to attend graduate school. She recognizes the pluses and minuses of the recent past, but laments that the population growth brought by the new buildings has made her old neighborhood a more anonymous place. "I don't want my neighbors to be strangers," she said.