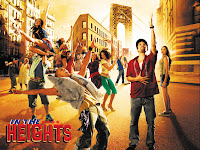 In the Heights won Tony Awards yesterday for Best Musical and Best Music and Lyrics. For Broadway, this means recognition for a play that makes the sounds, stories and rhythms of the city central to musical theater. For the Heights, this means striving immigrants can finally take the stage as symbols of a great neighborhood.

The rapping, break dancing, and Latin music that animate In the Heights restore the vernacular music of New York City to the Broadway stage. (The show also won Tony Awards for choreography and orchestration.) Once, there was no clear division between popular music and Broadway show tunes. But in recent times, revivals and imported productions have made Broadway tunes less and less part of the sound of the city. It's nice to hear New York singing to itself again on Broadway.

And it is good to hear the Latino voices of Washington Heights, a sometimes-forgotten neighborhood in northern Manhattan, on the Broadway stage. Dominicans are the largest immigrant group to settle in New York City in recent decades, and along with Cubans, Puerto Ricans and Ecuadorians they have made the Heights the home of one of the great Hispanic neighborhoods of New York.

The Heights, where my parents lived in the mid-Fifties when it was more of an Irish and Jewish neighborhood, has always been my barometer for measuring whether New York can provide safe, healthy homes for working families and immigrants. It hasn’t always been easy to do that. (That’s why I’m writing a book about the neighborhood since the Fifties.)

In Washington Heights, a dearth of good working-class jobs, overcrowded schools, wrenching cultural conflicts, and the murderous presence of drug dealers in the Eighties and Nineties made for hard times. But the neighborhood has come through all that---not without problems, particularly poverty--but in a stronger and steadier fashion than anyone would have predicted 15 years ago. Today, the biggest threat is gentrification. As a local newspaper put it, the people of northern Manhattan didn’t outlast thugs and drug dealers to lose their homes to realtors.

In the Heights captures the pride, energy and unease of the neighborhood. It approaches themes of home and family through the idioms of northern Manhattan. While the play emphasizes Hispanic experiences in a neighborhood that also has Jewish, Irish, and African American residents, its messages are universal. Just as you didn’t have to be Jewish to appreciate the themes of gender, change and tradition that animated Fiddler on the Roof, you don’t have to be Latino to grasp the tensions between family, ambition, roots and community that invigorate In the Heights.

As good as this musical is for what happens on stage, In the Heights also generates a special bond with its audience. Each time I see the play I have been struck by the fact the people sitting around me go beyond the usual Broadway crowd of rich folks and tourists. In whoops of recognition and knowing laughter, the people I sat with made clear that this story is their story, too.

When I saw In the Heights with my wife on June 4, I spoke with a group of young actors from Brooklyn. They produced an improvisational play with dance and music, From the Stoops of Sunset, about the beauties and struggles of their community. They worked with the Life Lines Community Arts Project of the Center for Family Life. In the Heights was their reward for work done well.

The young people I spoke with called In the Heights “awesome.” They observed that some of their own material was getting good enough to bear comparison with Broadway. And they recognized that the themes of working class and immigrant life that they explored in Sunset Park resonated with the dilemmas of In the Heights.

Any musical that can build a bridge between Washington Heights and Sunset Park is doing good work and important work. In the Heights, for all this and its Tony Awards, is doing very well indeed.

I saw FROM THE STOOPS OF SUNSET and I have to say that the actors could definitely present their work on Broadway. They created a full-length, fully improvised musical about their neighborhood Sunset Park, Brooklyn. Their stories were sincere, the characters entertaining and diverse, and they painted a true image of what life is like living in this mostly immigrant neighborhood. (AND THEY ARE ONLY TEENAGERS!) I have seen many shows from “Life Lines Community Arts Project”. Each time I see one of their shows I am inspired and captivated by the talents involved. “STOOPS” was their 25th year show. It just goes to show that if you are passionate about what you do and the message you are sending, that you will sustain yourself. Kudos to the kids of “STOOPS”! You guys are awesome!!! And I can’t stop singing their songs – when’s the soundtrack coming out???

"In the heights" is a spectacular musical with music and lyrics.I think that the performance of some of its Characters were wonderful such as Kevin Rosario and Camila Rosario.
this film had to win the Outstanding Director of a Musical.

I visit every day a few web sites and websites to read articles,
however this website gives feature based articles.

You ought to take part in a contest for one of the most useful sites online.
I am going to highly recommend this web site!

I'm not sure where you're getting your info, but good topic.
I needs to spend some time learning more or understanding more.
Thanks for magnificent information I was looking for this info
for my mission.

Here is my webpage forex steam -
-

This information is worth everyone's attention. How can I find out more?