Grant and Lee in War and Peace 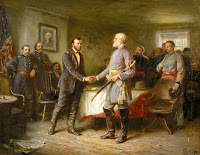 The Civil War fascinates Americans because it raises so many unsettled questions from our national past, especially the meanings of race and democracy. Now, a fine new exhibit at the New-York Historical Society looks at two iconic figures of the Civil War--Ulysses S. Grant and Robert E. Lee--to ask fascinating questions about the war, our military, and our past and present.

Grant and Lee in War and Peace, a collaboration of the Virginia Historical Society and New-York Historical Society curated here by my friend Kathleen Hulser, explores the relationship between civilians and the military before, during and after the Civil War through the lenses of Grant and Lee. But unlike most U.S. history survey courses, it doesn't end with Reconstruction.

Instead, the show asks difficult questions, implicitly and explicitly, about the lessons of this history for today. "The exhibition asks us to reflect on the application of military power to the achievement of our national goals," asks Louise Mirrer, president of the New-York Historical Society, in an opening statement. "The U.S. Army today faces challenges in Iraq that may recall its efforts in occupation and reconstruction of the post-Civil War South."

If the Iraq question haunts the end of the exhibit with contemporary relevance, one of the great strengths of this show is the way it situates Grant and Lee in the broad context of nineteenth century history. The exhibit extends back to the Mexican War, through the Civil War, and forward to Reconstruction and the wars against western Indians to establish the full context and impact of both generals' lives.

The show is animated by strong audiovisuals and some excellent objects, including Grant's saddle, John Brown's bowie knife, and drawings executed by Grant and Lee. (Both men learned to draw at West Point, where drawing was taught to give officers the ability to depict landscapes and enemies in the field.)

Yet the dynamic heart of Grant and Lee in War and Peace is its searching examinations of the historic tensions that define the place of the military in the United States: citizen soldiers versus professional officers; making war in Mexico versus policing supporters and opponents of slavery in Bleeding Kansas; the polished Lee versus the plebeian Grant as Civil War commanders; justice versus reconciliation after the Civil War; and memory versus history in the post-Civil War myth of the Lost Cause.

For me, these debates reached their height in the final third of the show. In a strong audiovisual presentation that takes the form of an actor playing a man reminiscing about Reconstruction-era Louisiana, visitors learn about the White Leagues, the Ku Klux Klan, and their massacres and intimidation of Blacks and Republicans.

President Grant opposed these effort to destroy Radical Reconstruction in the South, and went so far as to deploy Federal troops there. But his efforts were uneven and ineffectual.

This lesson in a too-little-known chapter in American history concludes with an admonition to visitors: when you are told about two hundred years of democracy in the United States, remember "the sad story of Louisiana and war after the war." In the background flash headlines that recall the Iraq War, with its sectarian violence.

This is a great warning against an uncritical pride in American democracy that obscures its uglier realities. As a policy proscription for the use of the military today, however, it is ambiguous.

When I look back on Reconstruction, I wish that Grant and his successors in the White House had kept Federal troops in the South long enough to guarantee full citizenship for Blacks. At the same time, I think the invasion of Iraq was a catastrophe and that we need to pull out sooner, not later. And if we are going to compare Reconstruction-era Louisiana and Iraq, who are the Iraqi counterparts of the freed Blacks of the South?

Grant and Lee in War and Peace doesn't offer hard and fast answers to such present-day questions, but it does make you think about the strengths and limits of the military in our politics and our culture. Like any good book, or any good exhibit, it raises more questions than it answers.

The exhibit, which is well worth visiting, runs through 29 March 2009.

I disagree vehemently with the author regarding Iraq.

First, Sadaam Hussein ignored about 16-17 UN requests to open his country to UN Nuclear inspectors. In addition, Iraq was firing on American planes in the area designated as a no fly zone for Iraqi planes (a truce provision of the first Iraqi conflict). Third, President Bush gave Iraq 48 hours to open the borders for nuclear inspection before initiating hostilities. And finally, the Iraqi atrocities commited on their own people, especially the Kurds, were no better than those committed in Bosnia/Kosavo before President Clinton began hostilities.

There was sufficient provocation to start a war even if no WMD were found and the possession of Iraqi WMDs is still a topic of debate.

The author seems to have forgotten these aspects of history.

I understand almost all but I just have one question ? for what wars were made it ? kill people, peace, personal interest ?